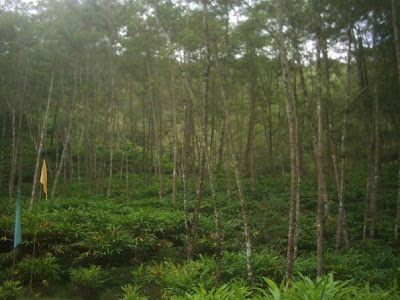 (अलईची-उतीस )
Alder-Cardamom intercropping is economically, a very promising farming practice of certain mid hill of Nepal, India and Bhutan.The Large cardamom is a perennial under shrub that is cultivated in shed of alder tree. These sympatric species best thrives on shadowy, moist and degraded land. Under the canopy of alder, the ecosystem provides protection and support function to the cardamom. This is the best example of human introduced species interacting for best economic return. Farmers give priorities to grow and save the alder tree to increase the cardamom production rather than its own return. High economic return and well-established market of cardamom lured the farmer and expanded the cultivation niche as mushroom growth. Now the plantation of cardamom is not limited only in marginal land and river and stream bank but it succeed to cover all arable as well as non arable land from its suitable agro climatic zone. If we consider the Nepal situation, thousands of farmer from eastern Nepal have cardamom cultivation as their primary occupation. Positive impact of cardamom yield under alder canopy than other tree species (Singh and Singh 1996; Sharma et al 2000; Sharma et al 2002) motivated the farmer to remove other species though they are the high quality timber tree than alder. Even during cardamom drying time, they cut down the alder tree very carefully so that it damages very few cardamom bushes. Apart from its high-income value, it is not labor intensive, a low-volume, non-perishable crop. The nitrogen fixation capacity of alder as root nodule, and high voluminous foliose of cardamom and alder enrich the soil. Cardamom agro forestry is almost a closed system that does not depend on external inputs . It can be argue that there is no input except human labor. Energy fixation, storage, net allocation in agro-economic yield and heat release and exist from the alder-cardamom forest is higher in any other type of tree-cardamom combination (Sharma et al 2002). Odum (2007) has stated that the yields of crop in agro forestry system are less than open field but it is reverse in this agro forestry system. Removal of other tree species and under-shrub plant reduced the plant diversity, which should have to be more vulnerable, but in order to create agricultural system, ecologically and economically sound, we need to consider the above-mentioned facts.
This video provides you a brief information about cardamom cultivation

System description
Alder-cardamom agro ecosystems are closed ecosystem totally run by renewable resources। Solar energy, rainwater/surface water, human labors are the major inputs of this system.The outputs of this system comprises the cardamom capsule, fibre from stalk (pseudo-stem), firewood and fodder. There is no useless part of cardamom. The alder forest strand is noticeable accumulation of natural wealth having both ecological and economical value which is initially not accounted. The growing forest density provides the suitable habitat for wildlife. The nitrogen fixation capacity of alder enriches the soil. The foliose of alder and cardamom add more humus on soil supporting detritus cycles. The ground surface is humus rich with a layer of litter and decomposing material. Cardamom required to 2 to 3 times weeding. The harvesting period is September to October based on altitudinal range. People harvest the cardamom, dry it and sell it on the market. The harvesting tools are traditional and simple. The drying kiln is prepared by locally available stone, mud and bamboo stripe. Fodder plants, bamboo, broom grass etc are planted on periphery of farm which intensifies the system. The farm system is more energy efficient if the capsules are dried in sun heat. It is efficient even if the fuel wood is taken from the same system. The quantum energy input and output, energy efficiency is higher than other forest -cardamom system. The N¬2 fixing Alder increased the quantum and energy flux which optimize the production potential of system. (Sharma et al 2002). The synergetic effect of mixed crop optimizes the efficiency of energy and nutrient cycling which maximise the resilience and subsistence power of system. For system diagram click
उतीस तथा अलैची कस्तो वनस्पतिहरु हूँन ?
Alder(Uttis): Alder (Alnus nepalensis D.Don) is a multipurpose fast growing perennial tree found in the subtropical highlands of the Himalaya. It belongs to the family Betulacea. It is called Utis in Nepalese and Nepalese Alder in English. It is a deciduous tree with silver-gray bark, which reaches up to 30 m in height and 60 cm in diameter. It occurs throughout the Himalaya at 500-3000 m of elevation from Pakistan through Nepal and Bhutan to Yunnan in southwest China. The leaves are shallowly toothed, 7-16 cm long and 5-10 cm broad. The flowers are catkins, unusually for an alder produced in the autumn, with the seeds maturing the following year (Barakoti 2006). The tree grows quickly and is sometime planted as erosion controller on hillsides and for land recovery in shifting cultivation. It is the pioneer tree species of succession for that agroclimate so it is often known as “tree of land slides”. It fixes nitrogen with the symbiotic action of filamentous bacteria Frankia(Ya,2004). It tolerates a wide variety of soil types and grows well in very wet areas.
Large cardamom: Large cardamom (Amomum subulatum Roxb) is a promising crop of eastern Himalayan region. Presence of wild relatives support the view of its origin in Sikkim (Subba 1984, Rao et al. 1993, Singh and Singh 1996).Large cardamom belong to family Zingiberaceae under the order Zingiberales (formerly known as Scitamineae) It is an aromatic spice mostly use in India and Middle East. Typically, cultivation is in woodland areas with overhead shade and access to regular irrigation from mountain streams with in an altitudinal range of 700-2000 meter above sea levels. Nepal, India and Bhutan are the only cardamom producing countries. Nepal contributes more than 50% of its production (George et al 2007). Large cardamom is a perennial cash crop grown beneath the forest cover on marginal lands. It is suitable crop for moist, shadow and steep land where other crops are virtually impossible. It is a cash crop of high economic return from marginal land. It gives good yield from shady, moist places i.e. stream banks so the local people often call it as “gold of stream”.
at 3:45 AM

"The Earth provides enough to satisfy every man's needs, but not every man's greed"
-Mahatma Gandhi

From Pen of Mine